This article was originally written by Brigitte Bureau for CBC. It was published on September 16th, 2020.

Many people wish for lower tax bills and more money in their bank accounts. But a group of young, rich Canadians want the federal government to tax them more.

About 200 wealthy people aged 18 to 40 belong to Resource Movement, an activist group that is expanding across Canada. Their mission is to reduce inequality between Canada’s wealthiest people and the rest of the population. 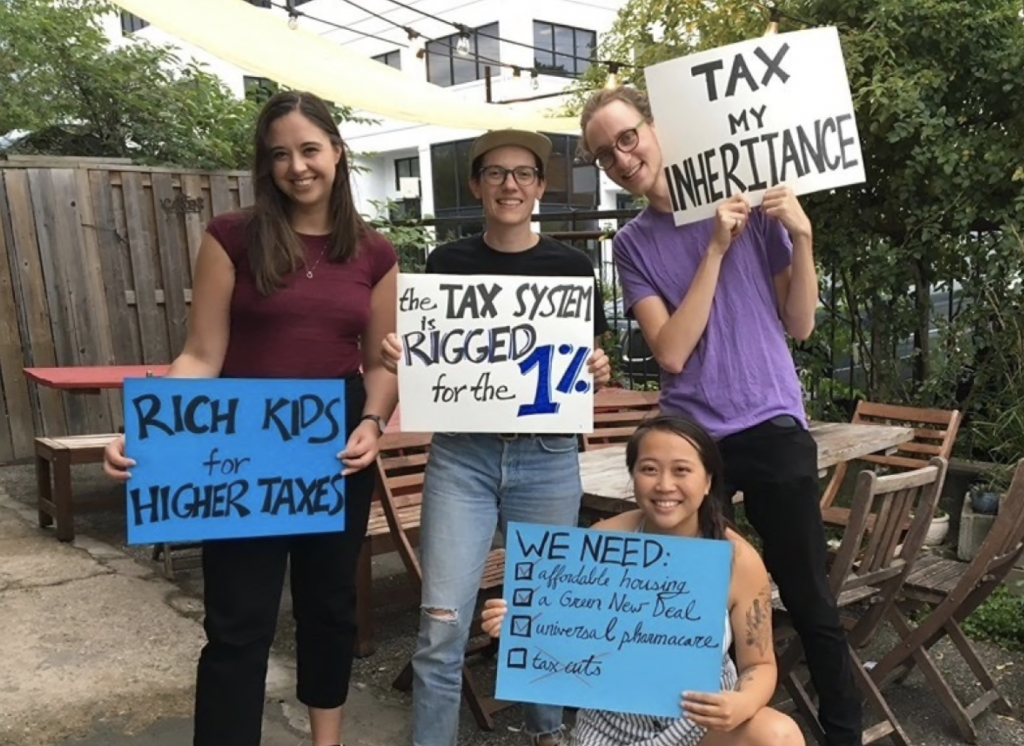 Its members are advocating for the creation of two new taxes that would have a direct impact on their own bank accounts and those of their parents: a “wealth tax” on the richest 10 per cent of Canadians, and an inheritance tax on the top 10 per cent of estates.

“A wealth tax will have no impact on my life. So, why not?” Montrealer Claire Trottier said in an interview with Radio-Canada. “No one’s going to cry for me if I have to give part of my inheritance.”

The group says it has redistributed more than $450,000 to social justice groups and, more recently, grassroots COVID-19 aid measures through its fundraising efforts since it was founded in 2015.

‘Tax my inheritance. Tax my fortune’

Trottier, a 40-year-old microbiology and immunology professor at McGill University in Montreal, grew up rich.

Her father, Lorne Trottier, co-founded Matrox, a high-tech company, and was ranked 38th wealthiest Canadian in the late ’90s when she was attending a private high school.

“I never had to worry. If I had trouble making rent, for example. I always had a safety cushion to rely on. It helped me make life choices that are difficult for other people.”

In 2000, her family created the Trottier Family Foundation, a charitable foundation that gives out grants every year. In 2018 alone, it donated close to $10 million to environment, health and education projects.

But Trottier said philanthropy is not enough.

“Our family made a conscious choice to give part of its wealth to society. There are many families like ours who do not make this choice,” Trottier said.

“A wealth tax is a way to make sure everyone does their fair share.”

Leading up to what would have been the March federal budget earlier this year — which was cancelled because of the pandemic — Resource Movement prepared a campaign taking aim at Canada’s tax system.

In a video produced for the group’s website and social media channels, members ask the government to “tax my fortune” and “tax my inheritance.”

In contrast, the bottom 40 per cent are estimated to have 1.1 per cent of the wealth, about $132 billion.

“As people who come from wealth, we know there’s a ton of wealth in this country that is just not being accessed by the state right now, but we need it and we can use it more productively,” said member Daniel Hoyer, a 38-year-old college instructor based in Toronto. His father was a chef and restaurant owner; his mother was an accountant.

He believes a wealth tax is the way to recover the money that currently eludes public coffers by taxing all assets.

How to balance the scales

But one expert said rebalancing the scales is easier said than done. Patrick Leblond, a professor with the University of Ottawa’s Graduate School of Public and International Affairs, is doubtful.

“‘We’ll tax the rich’ sounds good, but is it the most effective way of getting more money in government’s coffers?” he said.

“Government would have to hire people to try to measure all this, to run all over the world because, of course, the richer people are, the more they’re able to hide their assets.”

He suggested other measures could be more easily put in place, such as treating all personal revenue the same way — starting with capital gains.

Right now, if a person sells shares or properties, for instance, only half the profit, called a capital gain, is taxable. People’s wages, on the other hand, are almost all taxable.

Leblond said taxing capital gains less than salaries is “a fiscal advantage for the rich.”

While some experts don’t agree on the measures needed, others in power recognize there is a problem.

The new federal finance minister appears to be one of them.

In 2012, right before going into politics, Chrystia Freeland published Plutocrats: The Rise of the New Global Super-Rich and the Fall of Everyone Else, a book on the inequalities between the very rich and the rest of the population.

But she would not comment on the proposed taxes on the wealth and the inheritance of the richest Canadians.

In an email, her office noted the Trudeau government had introduced higher personal income taxes for the wealthiest Canadians, lowered those of the middle class and put the Canada Child Benefit in place. But her office recognized that “there is still more to do to ensure every Canadian has a fair chance at success.”

Trottier said the next speech from the throne, scheduled for Sept. 23, is the opportunity for the Trudeau government to do more.

The pandemic has laid bare who’s most deserving in Canada — the front-line workers whose salaries are often on the low end of the scale, she said.

Resource Movement is a project on MakeWay’s shared platform, which provides operational support, governance and charitable expertise for changemakers. The shared platform enables more time and money to go towards achieving greater impact. MakeWay is a national charity that builds partnerships and solutions to help nature and communities thrive together.