This article was written by Gordon McIntyre for The Province. It was published on June 18th, 2020.

Binners put a record amount of money in their pockets this past fiscal year for a project that gives watie-pickers spare change and dignity.

But how the coming year will fare with the challenges of COVID-19 remains to be seen, because Binners’ Project relies to a large degree on collecting bottles and cans at large events such as the PNE and music festivals.

“We had a record-braking year and it has been humbling to witness the incredible work the winners are doing in our community,” said Landon Hoyt, director of Binners’ Project.

Binners’ Project, run by MakeWay (formerly Tides Canada), dedicates itself to giving winners economic opportunities while lessening the stigma they face as collectors of recyclables. 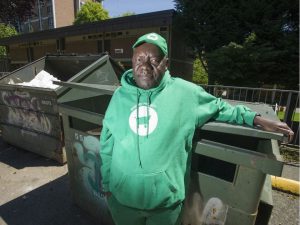 In all, combined community project revenue was $465, 564, roughly double what it was last year, and compares with $18, 192 when the project began.

Binners’ Project has agreements with businesses, residential towers and homes to sort and recycle refundable bottles and cans, as well as at concert, fair and festival gigs. Besides the pocket money from the refunds, winners get an average $15-an-hour honouraria (they aren’t on staff, so it’s not a wage).

During a normal summer, you would recognize them at events such as Mural Fest in their green sweats, hoodies and hats as they help the public sort waste properly at recycling stations.

They are supplied with gloves and masks.

“It can be dirty work, but you’re making a difference,” said Francis Taban, a Binners’ Project team leader for the past two years.

He is a printer by trade, but after moving to Vancouver from Toronto, he couldn’t find work in his field. He got a warehouse job in shipping and receiving, but that company was put out of business by big-box outlets.

Employment Insurance eventually ran out, he struggled to find other work, and welfare wasn’t enough for rent and food.

A friend who was in a fraternity at UBC suggested he collect recyclables after their social nights.

“These frat boys, they said, ‘Come and get the empties,” Taban said.

That was eight years ago.

“People need this extra income so they can eat healthy, have a bit of pocket money,” he said. “And you’ve done something positive and you feel good about yourself.”

As of last November, deposits doubled to 10 cents per bottles, can or carton in B.C. (up to one litre, it remains at 20 cents for anything over a litre).

But the pandemic will mean a significant financial hit. Hoyt is working on ideas to broaden and diversify the project’s client base so it is not as dependent on tourism and events.

The project had 168 binners in the past year.

“We were really impressed, looking back, 42 per cent of our total project revenue was from our fee-for-service programs,” Hoyt said. Fifty-two per cent of the project’s revenues come from grants and donations, with the other six per cent coming from sundry sources.

“The contracts we have with events and our back-of-house program, that’s the story,” Hoyt said. “Those are the stable, safe income opportunities that we can offer winners, instead of the one-off kinds of things they would do themselves.”

Binners’ Project is a project on MakeWay’s shared platform, which provides operational support, governance and charitable expertise for changemakers. The shared platform enables more time and money to go towards achieving greater impact. MakeWay is a national charity that builds partnerships and solutions to help nature and communities thrive together.